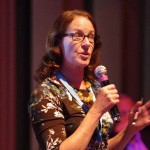 Mobile industry veteran Laurie Lamberth was named one of the second annual “Power Players in Mobile” by AlwaysOn, a technology media and events company that connects the entrepreneurial community in Silicon Valley.  AlwaysOn included Laurie in “The Wireless Consultants” category of Power Players for her success helping startup CEO’s create new enterprises and attract the technology and channel partners needed for success.  Laurie accepted the honor at AlwaysOn’s OnMobile conference in Redwood City on Thursday, October 10, 2013.

AlwaysOn Power Players are nominated by their peers, then selected by AlwaysOn as the most influential people in the banking, venture capital, legal, accounting and consulting segments who support technology entrepreneurs.  AlwaysOn describes the Power Players as “the infrastructure workhorses behind the ideas that make the Global Silicon Valley an incubator for success.”  Tony Perkins, AlwaysOn Founder and Editor, put it more succinctly at the OnMobile event:  “These players are the Rolodex that startup CEO’s want to have.”

A full list of the AlwaysOn 2013 Power Players in MObile can be found at the AlwayOn website,