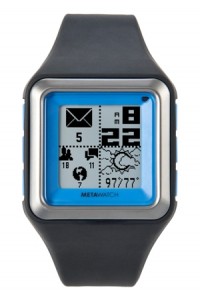 If you’ve followed my work this year, then you know that I’ve fallen in love with the Metawatch.  It’s happened again.

Last week, Metawatch announced their first consumer product:  a smart sports watch called the Strata.  This good-looking timepiece connects to your smartphone, bringing notifications and selected data to your wrist so you can see at a glance what’s happening on your phone and be informed about the things that matter to you.

Strata is a big upgrade to Metawatch’s  first developer model.  It’s water-resistant enough to wear  swimming, ships with running and cycling fitness apps, and is compatible with both Android and iPhone operating systems.  Supporting iOs opens a huge audience for Strata and should settle some of the compatibility issues I experienced with my first Metawatch due to inconsistencies in how smartphone manufacturers implement Android.

Following in the footsteps of another smart watch announced this year, the Pebble, Metawatch announced the Strata on micro-fundraising site Kickstarter.  As of today, the Strata project has raised over $200,000 from pre-sales on Kickstarter.   They’ll use the money to finish the product, obtain necessary certifications, and build their initial inventory.  With 17 more days to go, the project may top out at over $300,000 (up from yesterday’s estimate of $250,000).